skip to main | skip to sidebar

A little Aardvark never hurt anyone 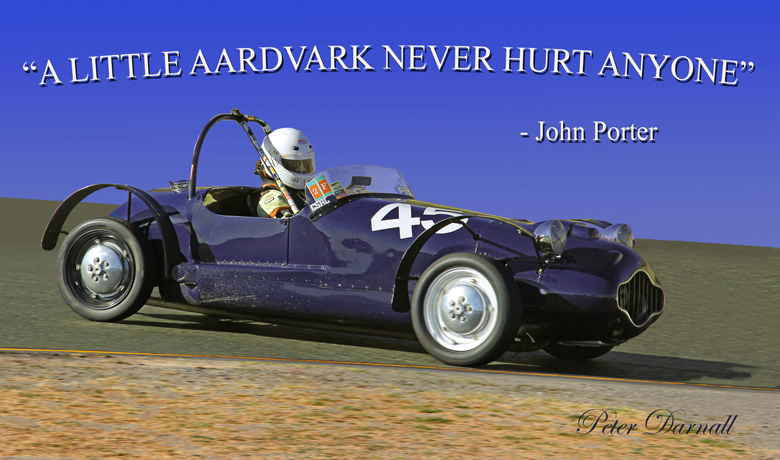 A Conversation with Don Racine: The story of his H-Modified Class Aardvark
By Peter Darnall
Photos courtesy Don Racine Collection
Don Racine has been involved with sports car racing for many years. He has developed an affinity for small-bore front engine/front wheel drive machinery and is an acknowledged master of the Mini Cooper’s unique handling characteristics. Don founded Mini Mania in 1974. The firm, which is now located in the California’s picturesque Gold Country, has grown to become the largest United States based supplier of parts for the Classic Mini.
Recently I had the opportunity to meet with Don at Mini Mania headquarters. The subject or our discussion was not the ubiquitous Mini, but his amazing Aardvark.
We present this video at the beginning of this article, because you won’t believe how fast the Aardvark is, and you’ll want to know more about Don’s vintage racer after you see the Aardvark in action as it eats Porsches, Jags and Gullwings at Laguna Seca.
The Aardvark is a feisty little sports racer based on the French Panhard Junior sports car. If you were expecting a sleek, Italianesque creation, you would have been disappointed.
The Aardvark’s appearance might charitably be described as “homely.” It looks like a kit car project gone bad; the cycle-type fenders are several sizes too large for the tiny fifteen inch wheels; the long nose is bizarre and, according to some, may be the reason for the “Aardvark” sobriquet.
“Not likely,” according to Don. “The name was chosen by John Porter (the original builder and owner) because he wanted to be first in the program.”
The Aardvark was a stellar performer in sports car racing on the West Coast. There were several of these small-bore racers—Roger Barlow’s Simca Specials and both of Ken Miles’ MG Specials come to mind – which staged epic battles with exotic machinery like Italian OSCAS on legendary courses like Pebble Beach, Golden Gate Park, and Torrey Pines. 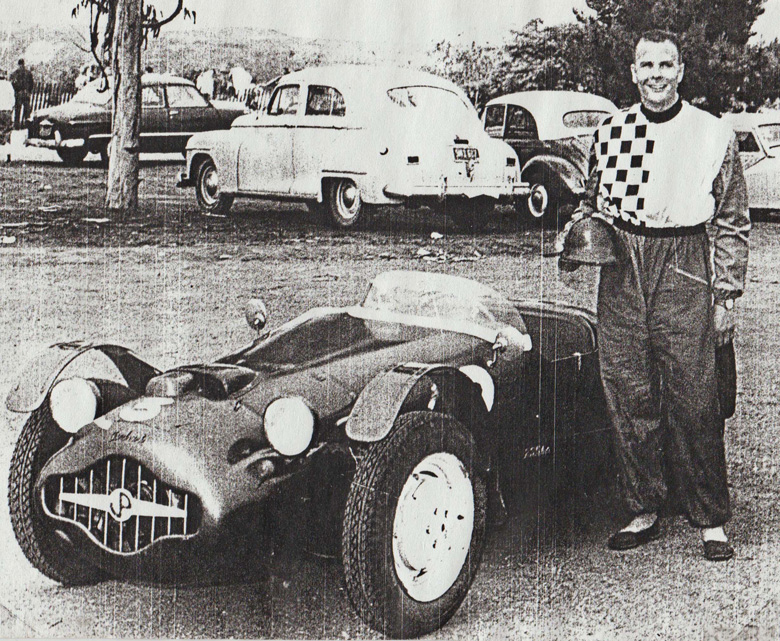 Porter with his Aardvark and “clown outfit”. According to Porter, “At March Field, in 1954, my wife saw a whole bunch of crazy costumes. She (Marjorie) came up with the idea that it would be clever to have a suit made up of all the flags that are used on the course. The only flag missing is ‘oil on the course.’ Notice the arms, there’s a checkered flag, a yellow flag, a blue flag, green flag and a red flag. If I ever get scared, and have to repair the suit, I’m going to put that where the drop seat would be in the underwear.”
The early days of the sports car movement were an exciting time, particularly if you were in your early teens and just learning about fast cars. I grew up in Berkeley, California and was intrigued by the sight of an occasional MG or Jaguar on the streets. The austerity of the post war era was slowly fading, but few of us knew much about those foreign cars. 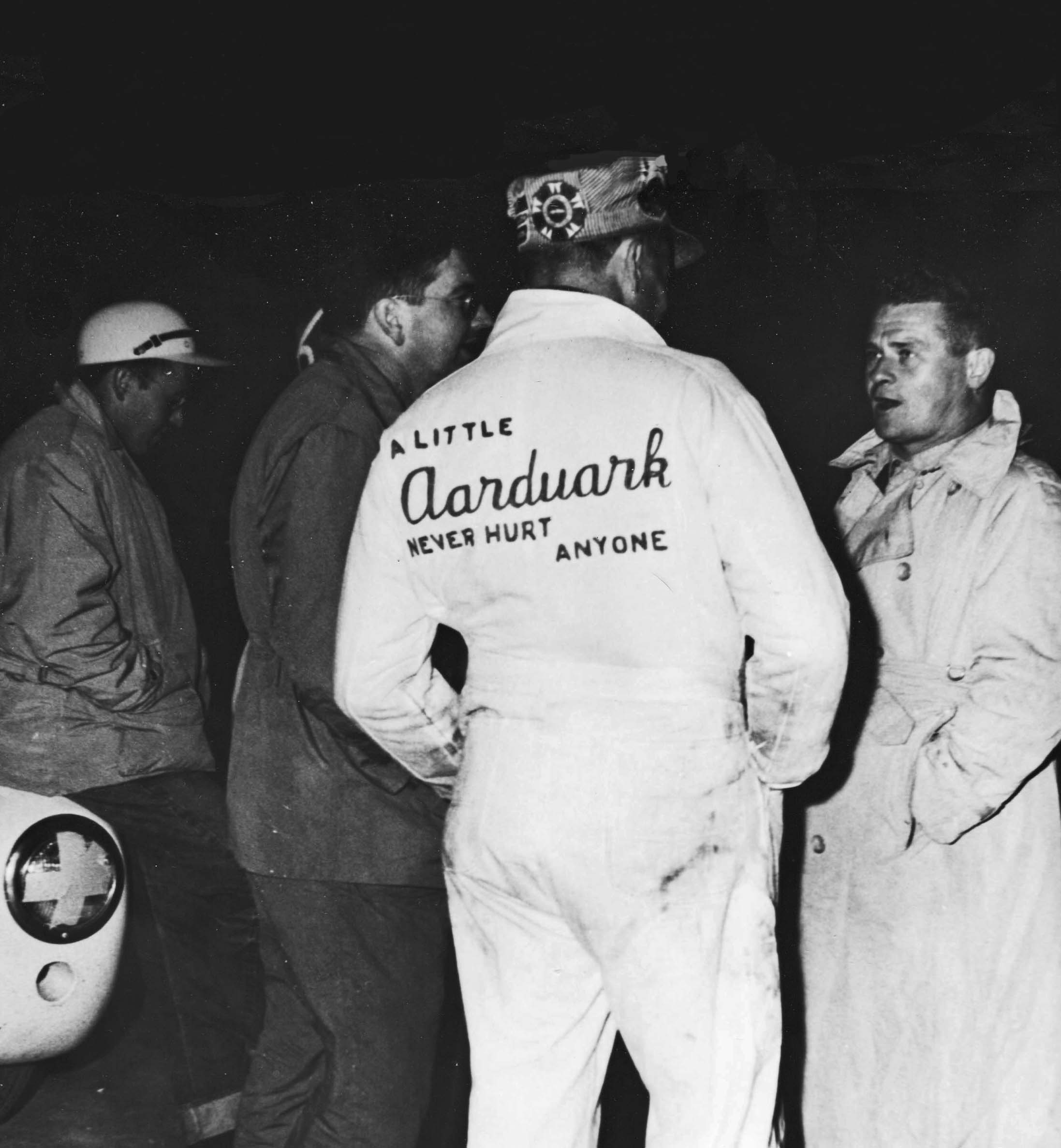 Aardvark pit crew: Can you imagine this kind of humor at an SCCA event today?
Racing events were less complicated in those days. Put a few hay bales on the outside of corners and lay out snow fencing for crowd control where necessary. Cars raced on whatever was available – usually on roads with less than perfect surfaces. This was real racing, not the contrived entertainment spectacle waged on designer courses that we watch on television today.

Cornering on three wheels in the 1950s, probably John Porter at the wheel.
The small-bore engine displacement classes produced a number unique race cars which could hold their own against the bigger, more powerful Ferraris, Jaguars, Allards, and other exotica when they were permitted to run head-to-head in the feature races of the day. They relied on nimble handling, light weight, and superior braking ability to offset the greater power and top speed of the big iron.
The Aardvark was one of those pint-sized giant killers back in the day and it’s a regular competitor on the vintage racing scene today. With an 850cc engine and a top speed of about 85 mph, the Aardvark is not much of a threat on a straightaway . . . but pay attention to the rear view mirror as you brake for a turn . . . that little shoebox is going to slip by on the inside and simply drive around the turn at a speed you don’t want to even think about. Don’t try to follow him—it will not end well for you! Coming out of the turn, the Aardvark will be well ahead of you – going about 85mph.
This maneuver has been performed too many times to count. The story began in Southern California about 1952…
French sports cars were well represented in Southern California in the early fifties and Panhard automobiles had a close-knit group of enthusiasts turning out for local racing events. The name Panhard goes back to the dawn of the automobile. The company, originally called Panhard et Levassor, was established by René Panhard and Émile Levassor in 1887. Deutsch Bonnet race cars, using Panhard engines, were active in post-World War ll competition, especially the Le Mans 24 Hour Endurance Race and long distance racing events. In 1952, a DB Speedster, driven by Steve Lansing and Ward Morehouse, won its class in the 12 Hours of Sebring, increasing interest with the sports car crowd. 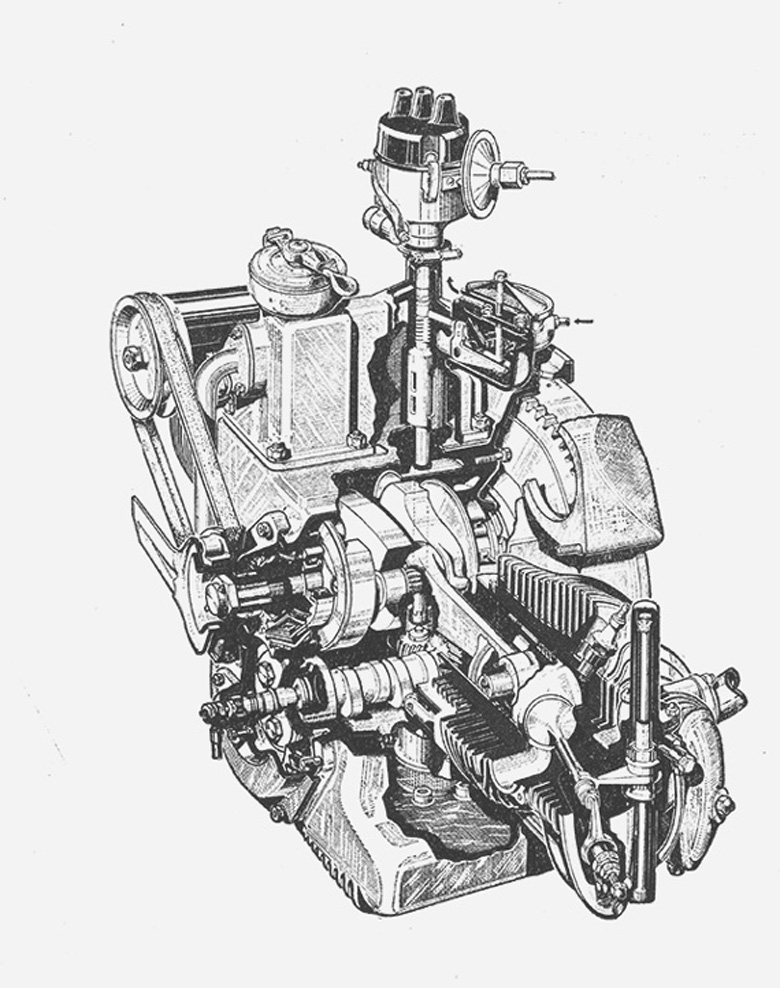 The 1955 Dyna Panhard engine. Note the valves operated via torsion bars.
When Coors Beer heir, John Porter, decided to get into sports car racing in the early fifties, he and his friend, Dean Banks, opted to build a simple car based on the Panhard mechanical components. The Panhard engine was a known quantity; this was the engine which had powered many of the Index of Performance winners at Le Mans over the years. Porter and Banks began with a standard Panhard Junior sports car and went to work stripping the car down to its basic components.
The Panhard Junior utilized a longitudinal structural member. This component was replaced by a series of fore and aft tubes tied with vertical “V-shaped” tubular pieces. Porter used ¼ inch x .080 wall tubing which added strength to the entire frame while reducing the weight by fifty-five pounds. The various alterations resulted in a lowered chassis configuration which necessitated a custom built exhaust manifold and an innovative “hung from the firewall” attachment for pedal location. 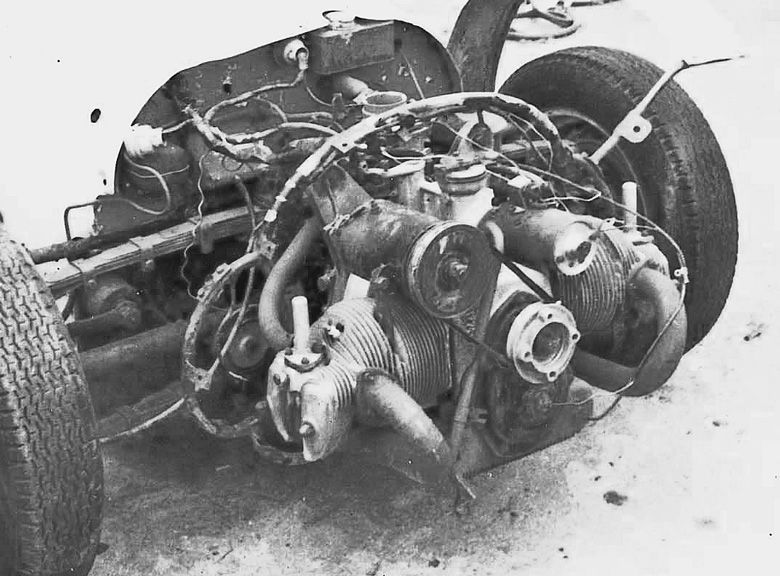 The Panhard engine in the Aardvark.
The basic suspension, engine, and driveline components of the Panhard Junior were retained. The front suspension consisted of upper and lower leaf springs while the rear suspension used trailing arms controlled by torsion bars. The engine is a two-cylinder, four stroke unit in a boxer configuration. As installed on the Aardvark, the original engine put out a respectable 42 horsepower at the front wheels. The engine and transmission were located ahead of the front wheels and drove the front wheels. The rear wheels essentially only served to keep the back end of the car from dragging on the ground.
The minimal body of the Aardvark was formed with aluminum panels which were fastened directly to the frame assembly. The distinctive nose section is fiberglass which, according to legend, was formed over a papier-mâché mold. Cycle fenders were added to comply with SCCA regulations. The quality of workmanship is very high.
The first competition outing for the Aardvark was at Torrey Pines in 1954. John had entered the Aardvark in three races in one day; the results: 2nd, 5th, and 11th places. This was just the beginning; the Aardvark quickly became known as a “giant killer” as it humbled many of the big names in the Southern California racing scene. After several years of racing, John believed he had learned all he could from his Aardvark and sold the car for a Porsche 550 Spider. The advertisement he created to sell the Aardvark was a classic:
AARDVARK PANHARD. Get into racing in the most reasonable class. This car has worn down many faster opponents with its dependability. Two engines, two transmissions, two chassis, 13 wheels and tires. Two new pistons and rings. Amal carburetor, my blessings, $2000. REMEMBER A LITTLE AARDVARK NEVER HURT ANYONE.
The Aardvark was subsequently campaigned by a series of drivers and eventually faded into obscurity. The badly deteriorated remains of the Aardvark were discovered in a Southern California field more than twenty years ago.
“When I learned of the existence of the Aardvark in Southern California, I knew I had to have it,” Don exclaimed. Sadly the car was a total neglected wreck. It had not been driven in a number of years. Don bought the Aardvark and restored it. His first outing with the Aardvark was an HMSA school event on the Laguna Seca circuit. The Aardvark was still in its tan primer paint. 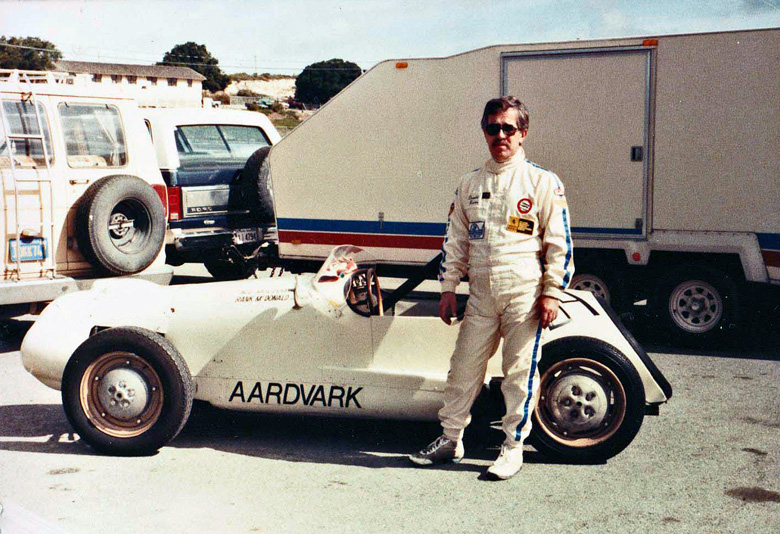 Don at HMSA driver’s school in 1985, with the restored Aardvark still in primer.
”This car was a Mini on steroids. It exactly matches my driving style. It’s the perfect car for vintage racing events.”
Don’s description of the driving technique for the Aardvark is not likely to be taught in any driving school. In fact, he claims that several competent race drivers who tried the car found it “undriveable” and brought the car back after a short time on the track. “It’s about trailing throttle oversteer”, he began:
The Aardvark is extremely light; this means you can “outbrake” almost any competitor and enter a corner much faster than you would with a more conventional car. Lifting off the throttle for a split second will bring the rear end out; this is not a problem in a front-wheel drive car. Immediately get back on the throttle and use the steering wheel to guide the front wheels in a tight arc around the corner–the rear end will take care of itself. The trick is to keep the throttle floored the whole time . . . it takes a bit of getting used to!
Don Racine has no plans for selling his Aardvark; “My kids would never let me,” he said with a smile.

Don Racine to the Aardvark

I was born in 1945 and my memory of my first car was that it a was 1949 black plymouth that I raced around town without the air cleaner on as it simply sounded cool. VW's I think followed but as sports cars were the place to be- I ended up with my first 'race'car, a street driven Porsche Super 90. Great little car did very well on most tracks on the east coast. When given the chance to pickup the family and move to land of car crazy, 10 month racing season, I sold all that I had and moved to Calif. Once here, I of course bought another Porsche. But insurance companies were not kind that young hot rods in Calif with a Porsche and quickly my memory flashed to the number of races back east were the fasted car on the track with this little old man driving a little shoe box called a Mini Cooper.
I was determined that this was how I was going to beat the insurance companies and have even more fun.
But, then as I tried to go Vintage racing I found that 20 years ago, the Mini was not considered acceptable (not old enough and too easy to modify).
With all my experience racing a front wheel drive car, it was natural for me to find a front wheel drive car that was acceptable to the vintage groups and thus I found the Deutch Bonnet. After a couple years with this great little French sedan, the Aardvark was found and the rest, as they say is history.

Mini Cooper Parts and Accessories by Mini Mania
Mini Mania Specializes in everything from Street to Full Race parts and accessories for the Mini Cooper.